So today’s highlight  (apart from re-familiarising myself with yokohama and its subway system…the city seems bigger than I remember..or maybe it just takes me longer to walk several blocks???)  was a trip out to the famous “Raumen Museum” in Shin-Yokohama  (which means new-Yokohama) and yes ramen is deliberately spelt with a “u” in English on the building for no good reason.

A reconstruction of 1958 Tokyo  (the year instant noodles were invented) it looks a bit like what Happy Days would have been if it were set in japan,  I loved the 50’s schlock horror japanese sci-fi movie posters on the walls, and various Sumo champions and famous starlets I didn’t recoignise …in addition to the museum itself, the building has 9 different ramen shops each representing a famous chef from a particular region of Japan.  I was there for several hours and not another single westerner in sight, in fact I don’t think I’ve seen one yet in Yokohama either…certainly none in  my hotel …there was a huge queue of people waiting in front of the museum even before it opened, but I managed to get in early and try a particular dish that is quite famous…

..the chef is called Sano Minoru  and his nickname is the “Ramen Demon”… he is Japan’s answer to Gordon Ramsey and appears frequently on TV insulting less “able” cooks…he is also a bit of a “Ramen Nazi”  in that he doesn’t allow people to use mobile phones, smoke, have loud coversations or wear strong perfume while in his restaurant… you can guess why I admire him!!!  …..and it was the best Ramen I have had…. 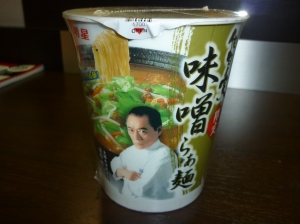 Anyway I wanted to try a variety of ramens and luckily you can ask for a “mini”  version of each house speciality  for 550 yen,  thouhgh this mini version is still bigger than any Ramen I’ve been served in Sydney.

I ended up trying only three types,  the last one I queued 45 mins for,  but that gave me time to digest the first two.  The last one was very popular I found out because it had only joined the museum earlier this year and people were travelling in to try it out….it showcases  tsukemen from a faddish restaurant called Ganja = “perfectionist”  (tsukumen is where the noodles are provided separately and you get to add them to the broth yourself).

Anyway, there was a Ramen guide (in japanese) that classified the various types in much the same way that people pretend they can taste bizzare elements in wine etc.  Eventually I’ll decode it…the only bit I could read was noodle thickness and what the soup-base is.

the gift-shop at the exit sells the recipe books and ingredients from each restaurant…not going to try to smuggle the ingredients back to Sydney and I’ve discovered that you can get any book at Kinokuniya in sydney, so i’ll save uop my luggage space for more interesting “objets”…I did by one interesting small gadget for my kitchen…which will remain a surprise.

anyway, not going to spend all my time at a keyboard go to go…  又 ね