Day starts early, I’m off the Hibiya to queue for tickets to another Takarazuka revue: “The Gypsy Baron”…this time I am third in line,  the couple in front of me are seeing Takarazuka for the first time…so I know more than they do 😉

I’m prepared with breakfast and my iPod this time….given the theatre hold 2069 people, it’s amazing that EVERY performance sells out (though not surprised that Noh does not sell out…),  I get a good seat (2500 en,  about $30) right in the middle of the back row and I have sports binoculars with me this time as well.

It’s still early so it is off for a stroll in nearby Hibiya Park:  quite pretty for a public park across the moat from the Imperial Palace: 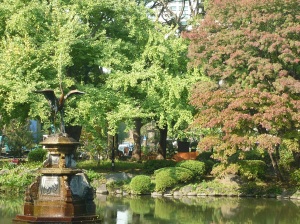 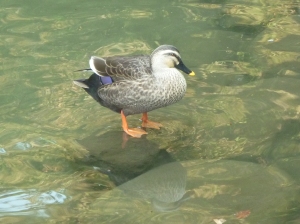 I find a topiary 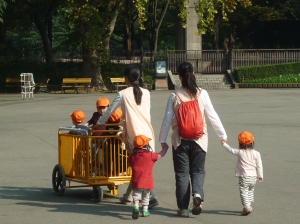 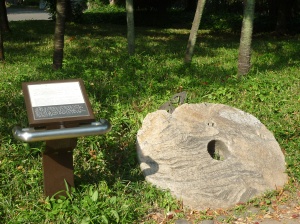 the sign says that this is an ancient form of currency from the Yap islands…I think the sign is quite old, since in 1924 it was estimated to be equivalent to 1000 en. Not a very poratble kind of currency! Now not quite what time I took this next photo

Then I’m off to Roppongi (which means Six Trees) to the new Mid-Town Complex (built only a few years ago) and the Suntory Museum:  there is an exhibit about Tsutaya Juzaburo, the famous publisher who discovered the great ukiyo-e woodblo0ck painters Utamaro and Sharaku, and was also briefly woirking with Hokusai as well. I get the audio guide, and for once it is not patronising…it gets right into the good stuff about the exhibit. I really enjoyed this exhibit especially after watching the movies about all of these characters recently at the art gallery of NSW and seeing the Utamoro exhibit in Sydney…he only painted a very small number of pieces and almost all of them are on display…as well as a reconstruction of the original Tsutaya shopfront.

Some of the buildings in Roppongi seem gto lack depth

and the street art is a minimal surface (maybe?)

The Tokyo crowd is much more mixed that that back in Takarazuka itself…the musical is set in a Hungarian village and involves lost treasure, a pig farmer with three daughters and a baron who becomes also a gypsy. After the break, the troupe put on their cabaret style revue…I like this one a lot because the scenery is all art deco and the routines are 1920’s and 30’s….gangsters etc.  with lots of latin american dancing.  About 15 mins before the end the power fails and there is a delay..I almost decide to leave early..I’m glad I didn’t…the finale involves a song that starts with

They are doing “Studio 54” next year…shame I will have to miss it!

Finally a puzzle: the following gadget can obviously be used for many things, but it has a specific purpose and target audience can anyone guess (look closely for clues)….