Today was  a fairly busy day and it involved a long walk in Higashiyama district (higashiyama means Eastern mountain, and there is an entire showcase of temples along the foot of the moutains that border Kyoto to the easy.

So we start by catching a bus…I’ve never caught a bus before in Japan,  I buy an all-day pass and although the buses are efficient,  if you are taller than 5 foot, kits a bit hard to fit in the seats! 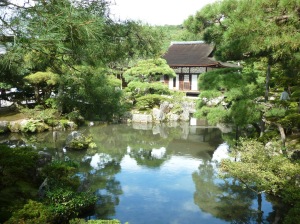 before you are surprised it was meant to be covered in silver foil, but they ran out of money…it is a prime example of wabi-sabi (not to be confused with middle-eastern wabism!)

Wabi-sabi is an aesthetic which is about transcience, modesty and asymmetry — the essence of zen 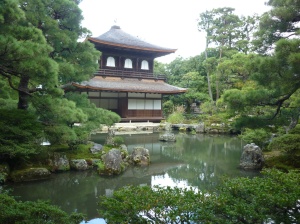 I even sneaked a shot of an interior panel 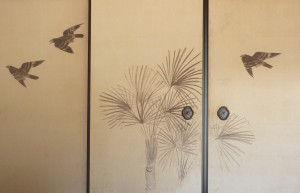 There were many examples of geometry that represents asymmetry near the temple, for example this helicoid potato chip is a chiral structure…and it even has a phase dislocation to illustrate the imperfect…and since it didn’t last long…it exemplifies the transience of material things 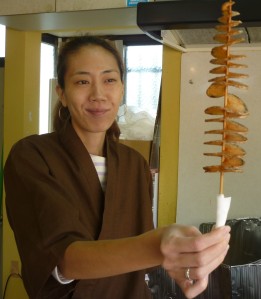 And here is a shot of the sculptured gravel at the entrance to Ginkakuji,  there is a frustrum to one side (a truncated cone) and a periodic grating in the gravel 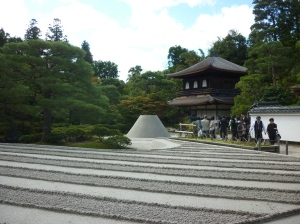 leaving the temple one then embarkson a,long walk south along a river following a path known as the 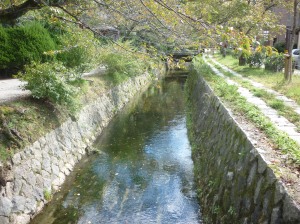 you can meet interesting folk along the path

and even get served a latte that looks like a former student (hi Anna!!) 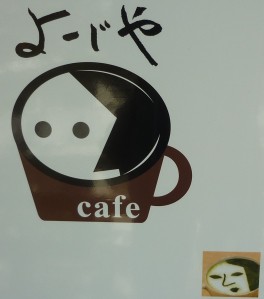 I’ve decided that 80% of the tourists in Japan are italians,  and they won’t have any trouble with the food because italian restaurants are really popular…I guess Rome had it’s share of philosophers…

The Path goes past many, many , many, many temples…did I remember to say many?  Quite a few have signs like this

It says 7-5-3 entry…I remember something about odd numbers and the ages of children…I’ll ask later when I stop for lunch. 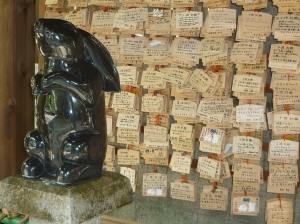 beloved by the local school children…it also has a 753 sign out the fromt. 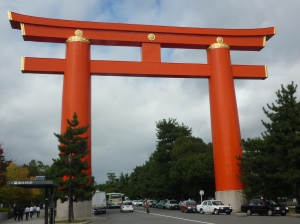 You can’t miss the entrance…must be sponsored by Telecom?? No seriously it’s an example of a torii, which means bird-perch …. hmmm if the bird that perches on that appears this will begin to sound like the voyages of Sinbad the Sailor 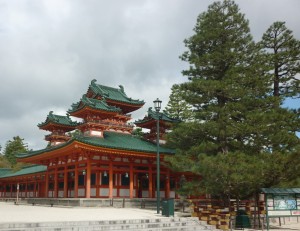 Now I didn’t think it was the most attractive place I had seen but I guess it is heritage listed for its historical significance…for example,  it is the starting point of the famous Jidai festival which took place while we were listening to the Sekisui business plan…I guess I’ll have to make do with these postcards 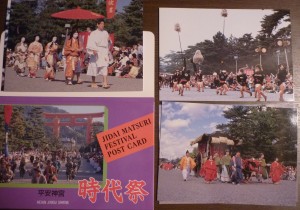 My 御朱印帳 (goshuincho) is getting quite full, it might bbetime to think of buying a new one…now the one here at Heain jingu looks nice so I decided to buy it…its a book that you get inscribed as you visit each temple..the books cost 1000en  and each inscription costs 300en 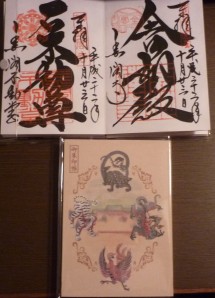 The double inscription at the top is from kikakuji, and the cover of the book below illustrates teh four seasons. 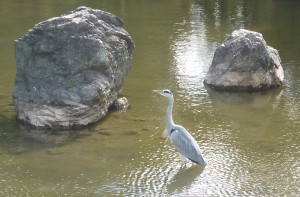 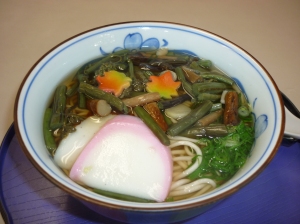 I chat with the owner for a while and discover the 753 are coming of age years for young children, and they are taken o teh temple when they reach those ages, 3 and 7 for girls,  5 for boys  and october is the month when it happens. 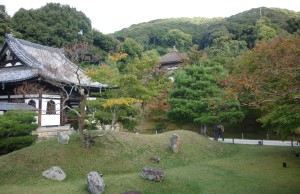 .and it is extremely beautiful…somewhat further up the mountain side and so the autumn colours are more prevalent.

There is an ox statue out the front 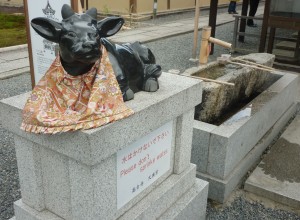 you stroke whatever part of it to cure an illness in thesame spot.

Next door is another unplanned visit to Ryozen Kannon 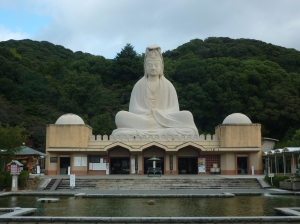 This giant statue is in honour of the unknown soldier and stands 24 metres tall, the nose alone is over a metre! Here you can find a giant sphere as well if you walk around it 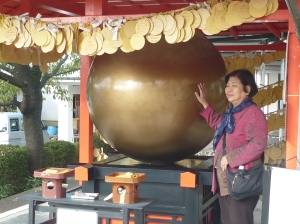 touching it with your right hand your wish will come true. 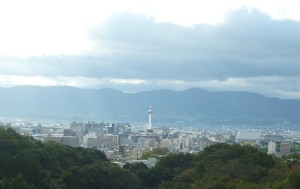 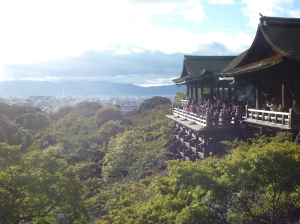 and finally some random shots of the crowds… 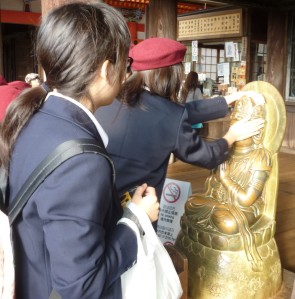 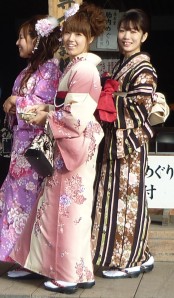 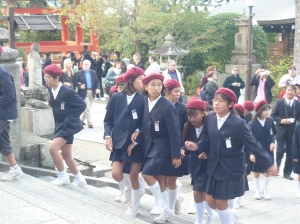 the there was this machine that roasted chestnuts..once in a while the owner had to let off steam 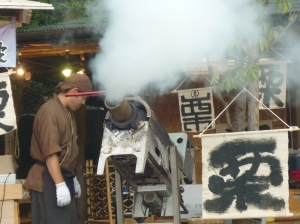 which frightened the little samurai puppy 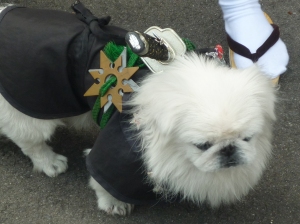 So I walk home…it takes quite a while…..but I know a rooftop onsen is waiting for me…while I soaked in the rooftop onsen I composed a little haiku…

The day is almost over

I even inserted a pun in the middle of the last line for Mallory and Hiroko-sensei to find.